Three decades ago, foreign aid professionals like my father had to cobble together homemade databases in order to keep track of their work.

Today, not much has changed, and practitioners in the field still lack the software tools they need to count their outputs and analyze their impact. DevResults is working to change that, by creating easy-to-use software specifically intended for monitoring and managing foreign aid programs.

This is the transcript of remarks at the two-day "M&E Tech: The Future of Monitoring, Evaluation, and Technology in Development" conference in Washington, DC on September 26, 2014. 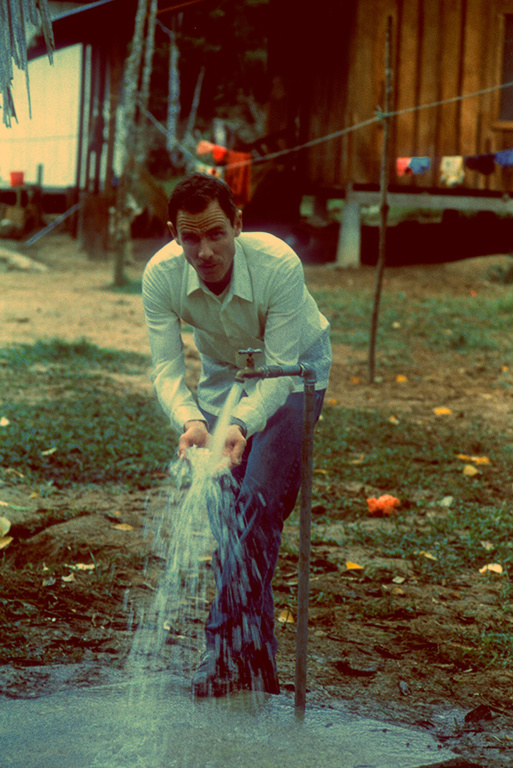 This is the only slide I have. This is my dad, also named Herb Caudill, in 1986. I went with him to a remote village in the rain forest in Ecuador, near the Curaray River, to help build a water system. The whole village was involved, we tapped a spring, built a concrete water tank, and laid pipe to several public spigots in the village. I took this picture at the moment the water first started flowing. That water is still flowing to this day; a couple hundred people have had convenient, clean drinking water ever since the day that picture was taken.

My dad spent his whole career doing this with USAID: building water systems in rural areas. When we arrived in Panama in 1976, about 20% of the rural population had access to clean water; when we left in 1982, that number was 60%. The numbers in Ecuador were almost identical: 21% when we arrived in 1982 and 60% when we left in 1987. In both countries child mortality dropped by about a third from the time we arrived to the time we left. And of course Dad doesn’t get all the credit for that, but he’s now retired knowing that he was part of the solution, that he helped move the needle in the right direction.

The reason I bring my Dad into this is that around the time this photo was taken, he – and he was not a computer guy, mind you - he was teaching himself dBase III Plus in order to build a system to keep track of his work. So if you asked him at any given point how many villages his programs had served, at what cost, where, how many individuals, how many men, women, children, how many indigenous people, how many gallons of water, he could give you the exact numbers – and he was the only team leader at that USAID mission who could respond with that kind of accurate data at a moment’s notice.

Now this was 28 years ago. I’m don’t even think they called this kind of thing M&E back then. They probably called it something simpler, like “telling the people who gave you money to do stuff, what you did with their money.”

But what’s striking to me is how little things have changed. Nearly three decades later – at a time when M&E has evolved into a profession, and an academic discipline – at a time when presidents and prime ministers of the rich world promise that they’re going to open the floodgates of development data – the very simple act of counting our outputs defies so many of us. After three decades, M&E at its most basic is largely still an unsolved problem – for a lot of reasons, but mostly just mechanical reasons – just because collecting data and getting it in usable form to decision-makers – at the local level, and then the national level, and then the global level – is so, so much harder than you would think.

And this is a serious problem on so many levels.

Now, it’s hard in this profession to avoid cynicism and despair, and I think each of us in the development community has a personal responsibility to actively fight off that kind of negativity. The fact of the matter is that each of these difficulties represents a tremendous opportunity to make the world better: The trick is to zoom in on the parts of the puzzle where we can actually make a contribution.

That’s what we’re doing at DevResults. We see the lack of good, reusable software as a crucial missing link in the development picture, and we know we can make a contribution. We’ve grown from just me and Shane four years ago to eight people now, and we’re overwhelmed by the amount of interest that our software has generated, and we wrestle on a daily basis to figure out how to grow and make the software better and do right by all of you who believe in us.

And at the beginning of every day we each remind ourselves how lucky we are and what a rare privilege it is to be confronted with a big, consequential, global-scale problem, and to actually be in a position to do something about it. We love what we do, and we hope that we’ll be able to look back and say that we did move the needle by making it easier for you to monitor your interventions and to evaluate them and make the case for them and improve them and scale them to have an even greater impact.